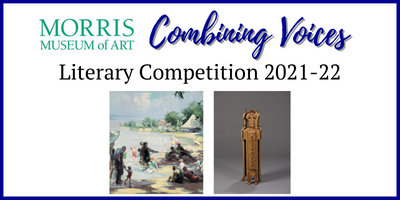 For many years, the Morris Museum of Art has hosted Combining Voices, a special literary competition for students in grades 4 through 12. Each year from August through March, in their classrooms, at home on their computers, and on special tours of the museum, students from all over the Central Savannah River Area and beyond view and discuss five works of art in the museum’s permanent collection. Afterward, students create works of poetry or prose inspired by one of the paintings and submit their work for judging. It is a competitive undertaking.

At EDS, students viewed each of the five works of art online and responded to the artwork by composing original poems and short stories based on the artwork. This year, Tucker B. won first place in the sixth-grade division with “The Lake” inspired by Gladys Nelson Smith’s oil painting entitled Afternoon at the Beach, Chesapeake Bay. Madi G. won first place in the eighth-grade division with “Let Me Tell You a Story” inspired by Clyde Connell’s untitled mixed media sculptural work.

Congratulations to Madi and Tucker on their outstanding creative writing endeavors! 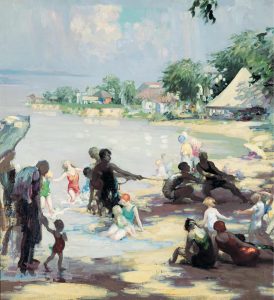 The Lake by Tucker B.

Inspired by Afternoon at the Beach, Chesapeake Bay

The lake is a place where you spend the day

Getting kissed by the sun as you swim and play

Going tubing with your friends until the sky turns black

No one can wait for summer to come back

Sunset boat rides to the dam and beyond

Mom calls us in for dinner, and we reply, “Hold on!”

As the day comes to a close, we call it a win

We can’t wait to get up and do it again! 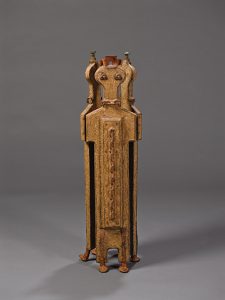 Let Me Tell You a Story by Madi G.

George was furious. All he wanted to do was go to the movies. Charlie promised Mrs. Tanaka was going to pick him up and drop him off. They’d even feed him! She wouldn’t have to worry about dinner or anything. And it wasn’t like he hadn’t done his homework. He felt his blood boil as he recalled their conversation.

“Georgie, I’m happy you’re friends with Charlie, but you can’t go to the movies on Saturday. Your brother is visiting from college this weekend, and I need help getting the house ready.” Her tone was gentle, but it didn’t leave any room for argument. He rolled his eyes.

“But Mooooom,” he whined, “We’re gonna go see the new karate movie! And afterward, Charlie said Mrs. Tanaka is taking us to hibachi! We never eat hibachi.” He couldn’t understand why his brother coming home was so important. It’s not like he took George to hibachi.

His mother took a breath and shook her head. Her tone was serious. “George. I said no. You are staying home this weekend.” George, in a fit of rage, yelled at his mother.

“YOU ONLY CARE ABOUT HIM ANYWAY! I WOULDN’T BE SURPRISED IF YOU SAID YOU’VE NEVER EVEN LOVED ME! It’s. Not. FAIR!” he screamed, throwing the door open and running out, slamming the door behind him.

George ran and ran, not stopping until he reached the park. He sat down on a bench and sniffled. He didn’t mean anything he just said. He was just . . .just so mad! He really wanted to go to the movies with Charlie. And now he was here, thinking about all the things his mother had said to him. She won’t miss you anyway, the voice inside his head sneered. You can just run away and live with Charlie . . . they won’t mind.

The more he thought about it, the more it made sense to him. Why wouldn’t they want him? He could help around the house and help Charlie with his homework. He sat on the bench, lost in his thoughts until an old man walked up.

His skin was the color of copper, with freckles dotting it like constellations. His stark blue eyes were surrounded by ringlets of pure white, fluffy hair. He flashed the boy a smile, a twinkle in his eyes that made him appear young. His voice was soft and melodious.

“May I sit next to you, boy? I’ve been walking all day and could use some rest,” he said, gesturing to his ragged shoes.

George gave him a puzzled look. Why would that old guy need permission to sit? It wasn’t George’s bench, so he shouldn’t have to ask. Mystified by this stranger, George’s voice was quieter than usual.

“Um . . . s- sure I guess. Hey mister, what’s that thing in your hand? Is it . . . like some sort of cookie tower thing?” He pointed to the strange object the man was holding. It looked like . . . well, three people. They had chains around their neck and some weird stripe on their head. The three people were in a sort of triangle facing outward. Each had a crown on its neck. The man laughed. It was a very loud and boisterous laugh, unexpected for a man so frail looking. George was a little startled.

“Hahaha!! This is not edible, boy!” the man said, taking a seat. “You’re quite curious. Any reason you’re out here alone?”

George played with his hands, mumbling, “I got into a fight with my mom . . . She said that I couldn’t hang out with my friend this weekend because my stupid brother is coming home from college. I don’t care about my brother though!! I don’t care about either of them!”

The man nodded as if he understood. “I see, I see.” The air around him sparked with energy. “Let me tell you a story.” He held the statue up, beginning his tale. “Long, long ago . . .

There was a land with four kingdoms, each ruled by a different king. They were all brothers. The oldest was the king of architecture. Stoic and calm and looked up to by all. The second brother was a king of delicious foods, known for his easy-going and jolly manner. The third was a king of precious jewels and metals. Despite his flashy kingdom, he was the quietest, following the decisions his brothers made. He was the kindest of all of them.

The youngest brother was the king of clothing. He was foolish and boasting, claiming he had “the finest silks in all the land.” He showed off his clothing and outfits at parties, becoming jealous when his brothers were given attention. One day, when the clothing king got especially jealous, he decided it would be better to have no brothers at all. He visited a local sorceress to enchant three matching shirts so that he could trap his brothers.

“Is this truly what you want?” she asked, her tone guarded as she looked into his eyes.

“Yes! A thousand times yes, I can no longer stand them!” The king was eager, clasping her hands and nodding his head quickly.

The witch simply nodded, a glint in her eyes. Her tone remained even: “Very well. If that is what you wish, so be it.”

He took the shirts home and presented them to each of his brothers. As soon as each brother had his shirt on, they shrunk as chains appeared on their necks. They screamed out, joining hands so that the others would not have to suffer alone.

A crack of lightning struck as the witch appeared. Her eyes glowed white as she boomed, “Now you will never have a home, for you’ve given yours up for greed. Carry them as a symbol of your foolishness.”

The man went quiet. “Do you understand? Now go do what you must do.” George jumped up and hugged him, silently thanking him before going home to apologize. No matter what, family will always be important. For they are your one true home.