These stories were inspired by Mrs. Breland’s character sculptures and were written in Art class entirely by students in 2nd and 3rd Grades. 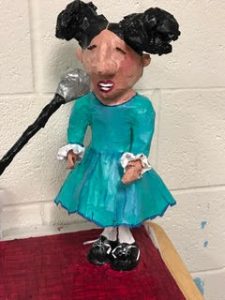 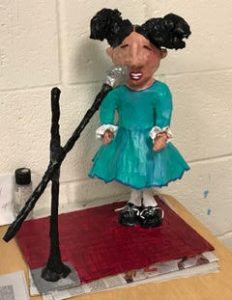 Rosabelle entered a singing competition at her school and will get an entire $1,000 if she wins. She also gets a cool trophy that is big and shiny.  Her favorite singer is Bruno Mars so she’ll be singing, “Shut up and Dance with Me.” Rosabelle was very nervous when she walked on the stage and got to the microphone. The gym was filled with people and even some standing up. Before the music started Rosabelle had butterflies in her stomach. You know. That’s when you feel like you are going to throw up. Then, the music started but it was the wrong song. Instead, the song that played was “Gummie Bears”. Not knowing what to do she just stood there in front of the microphone staring at all of the people. Rosabelle then got the courage to tell everyone it was the wrong song.  She told the man in charge of the music to please change the song. This time when the music started it was the right song.  She took a step forward moving closer to the microphone to sing. The audience was really quiet as they listened to her singing. Halfway through her song the people in the audience stood up and started dancing. You know the kind of dancing that parents do to embarrass you. That was how they were dancing. That made Rosabelle feel happy and excited. And when she finished the audience cheered. Rosabelle couldn’t believe how excited they were for her.  It made Rosabelle so happy. She walked off the stage very happy about her performance and proud she participated. 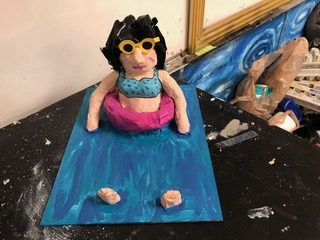 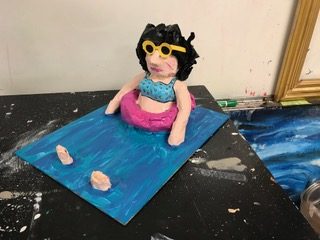 Angelina is on vacation and going to her best friend’s swimming pool to relax. Relaxing is where you get away from your brothers and sisters because they are annoying and where you get to eat lots of junk food. When Angelina arrived at her friend’s house her friend tells her she has to go to work but she can stay to use her pool. Angelina changes into her favorite polka dotted bikini (we say “bikini” instead of “bathing suit” because a bikini is a funny word to say). She grabs her yellow sunglasses and heads outside to the pool. Just as she starts to go into the pool, Angelina realizes she left her big pink float in the car. Thinking she’ll only be a minute, she doesn’t grab a towel but just goes outside to her car to get her float. With her float under her arm, she walks to her friend’s front door to go back inside. Just as she tries to turn the knob (of the door) she realizes it’s locked!  The door is locked and she can’t get back inside the house. Angelina felt silly standing in her friend’s front yard with a big pink float and only wearing a polka dotted bikini (saying that word makes us laugh). What was she going to do? She couldn’t call her friend because her phone was in the backyard at the pool. Her only option was to climb the back fence to get to the pool area. She knew she had left the back door open so if she could get over the fence she’d be just fine. It wasn’t easy climbing a fence with no shoes and wearing a polka dotted bikini (hee hee). BUT, she did it and was very happy to get back to the pool. As she’s floating in her friend’s pool she chuckles to herself about getting locked outside and about having to climb her friend’s fence in her polka dotted bikini (we love that word). Angelina is just thankful for her time off (away from her loud brothers and sisters) and being able to relax…finally! The only thing that is missing is…where is the junk food?