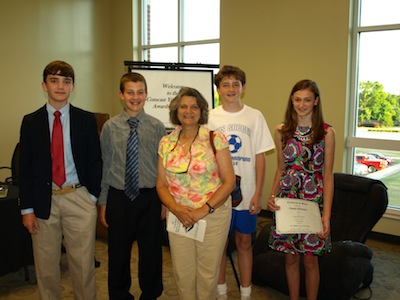 Mrs. Perry and I are proud to announce that FOUR middle school students placed in the contest! Check out their winning entries below. These talented writers were recognized at an awards ceremony at Georgia Regents University on the evening of May 7.

At the Lake
Emma K.

We sit and listen to the now cool wind, on the porch
We dip our bare toes into the cold lake
The dying trees are beginning to drop their yellow, red, orange, and brown leaves

As we run, the hard ground crunches with dry, crisps leaves
We are now gathering around the fire inside, for it is too cold to sit on the porch
There are no more boats on the dead silent lake

We cover the furniture on the porch, walk across the leaves to the car, and say good-bye to the lake until next spring

I awoke soaking wet in the paddle boat, looked around, and swore. It had not been a dream. The impossible, unbelievable awfulness had occurred. Mark and Jane were nowhere to be seen. I was stranded somewhere on this blasted Lake St. Catherine, and I had a headache. To top it all off, I was still “it” from our previous game of tag. Sorry, I should probably explain. My brother Mark, my sister Jane, and I, Howard, decided to play tag what seems like a few million years ago. This time, unlike all the other games, we were going to use marine vehicles. Mark got the row boat. Jane got the sunfish. I got the slow, hunky, bathtub of a boat, the paddle boat. Mark was it.

There was a strong steady wind coming from the North East that inflated the sunfish’s sail and sent Jane zig-zagging a good distance away. Mark turned on me and directly at me. It was up to this paddle boat to beat him. The paddle boat was a bright baby blue. The steering mechanism was a black handle like a lever door knob. It had two bucket seats with peddles like a bicycle in front of them. Behind the bucket seats there was a vast area for another person or water to sit. However, the paddle boat was not walled. One could accumulate water very quickly. The one advantage of this little boat was that it was unsinkable. No matter how much water or mass was on it, the bath tub would slowly paddle on. I didn’t know it, but this fact would save my life.

Mark had tagged me and was rowing away with his long sturdy oak oars when the clouds roll in. The summer sun was completely obscured. The temperature dropped. The whole atmosphere seemed barren, forsaken, and yet peaceful.

Boom! Crash! Whoosh! Thunder, wind, waves, lightening, and rain pelted every inch of the lake. Out of the corner of my eye, I saw a flash strike the mast of Jane’s sunfish. I saw Mark battling the waves with his oaken oars. I felt rain beating and battering my neck, the waves making concussions on the paddle boat, and my head drooping, dropping, onto my knees.

And now, I was here. Where ever this is. Where were Mark and Jane? Should I go look for them? Should I look for help in one of the cabins? Should I try to make a big fire that someone else will see and come to the rescue? What would Bear Grylls do? Come to think of it, he would probably get his camera man to call in a helicopter and pick him up. What should I do? I’m no Bear Grylls or survival man. I can’t make a fire without matches. I might as well go back out on the lake.

I put my feet on the peddles and scooted out of the inlet. Then I noted the thick clumps of milfoil. I was in the Little Lake. The Little Lake is in a section of Lake St. Catherine that is connected to the main lake by a narrow strait. Unlike the main lake, however, the Little Lake is almost impossible to navigate because of the layer of impenetrable bushels of Eurasian milfoil. Besides that, all I had to do was paddle to one of the cabins on the opposite shore and get whoever lived there to help me. It sounded easy to me.

I began to put my plan to the test. I inched toward the first wave of milfoil. Once in it, I half inched forward. This was going to take a while. By a whileI meant a day. I spent all of that day paddling, pedaling, and swimming. I would paddle until the rudder got tangled in milfoil. Then I would dive in and untangle the rudder. Then I would drag myself back in and start pedaling again. I was so tired. I was tired of water, pedals, milfoil, and most of all the color baby blue. I’m going to repaint my room a good color, like red. Anyway, I got to shore during the early hours of the morning. I attempted to get out and walk to the cabin, but my cramping calves and thighs held my weight about as well as a pair of toothpicks. I collapsed with exhaustion on the sand.

Again I woke and looked around. I was in a bed with smooth, fine Egyptian cotton sheets. I jumped out of bed to meet my savior. Someone had changed my clothes. I looked down at my recently ironed khaki pants and white button down shirt.

“That’s strange,” a man said as he closed the bedroom door. “I could have sworn I gave you corduroys.”

“I know. Your name was written on the tag on your shirt,” the man said. “My name is Robert Seymoure, but you may call me Captain.”

“Well, thank you Captain for your hospitality,” I replied. “Where are my clothes?”

“I have thrown them away. Your socks were growing mold,” Captain remarked nonchalantly. “I thought that a new outfit was necessary.”

It was silent for a few seconds, then I blurted, “Can you take me home now?”

“Of course I will my boy. Where do you live?”

“I’m at the Rochester Cabin, the one that looks like a lighthouse.”

“So you aren’t from the Little Lake. Good. I take pride in making sure I know all of my neighbors.” Captain said. “We’ll go right now.”

He led me downstairs into an extravagant hall with a high ceiling chandelier, large dining table and walls adorned with boat models, maps, and exclusive volumes of Moby Dick. Here he handed me a pair of new sneakers and plaid wool socks. After I had put these on, Captain led me out to a lavish, green courtyard with a vineyard on the right and a creatively shaped hedge on the left. In between these, there was a vine covered gate that Captain swung open like the Pope coming out to greet a cheering crowd. On the other side of the gate a massive schooner swished and swayed with the slight tide. Captain gazed at it with admiration, sighed, and led me to a small outboard motorboat docked beside it. As I got in I, noticed my paddle boat was tied to the back of the motorboat. Captain revved up the engine. I was going home.

Ezra B.’s winning entry has not been submitted to Panther Post. We will post it as soon as it’s available!