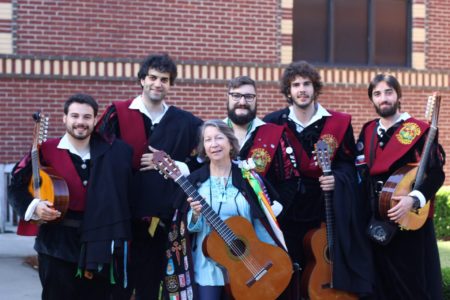 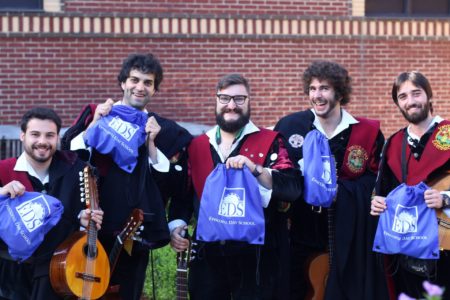 This year to celebrate Hispanic Heritage Month, we have the privilege of enjoying some Spanish Music and Culture directly from Salamanca, Spain. Today, we enjoyed a performance given by a small group of the members of La Tuna Universitaria de Salamanca.

La Tuna is a group of male student musicians who participate during their years of university studies and maybe even after they graduate. Las Tunas Universitarias are a very old tradition in Spain.  Usually, each university has a Tuna (group of musicians) and they are formed according to each field/school, e.g., the school of Medicine has a group, the school of Law has a Tuna, the School of Education has a Tuna and so on.  During school festivities, they compete against each other, but regularly you will find them playing around the school campus and/or in town in the Plaza Mayor, or serenading their girlfriends or wives. In growing up in Colombia, once a girl got to be a college student, there wasn’t a better gift from a boyfriend than to be serenade by a Tuna.

We will be visited by a small group of La Tuna Universitaria de Salamanca, Spain. (Not all of them can afford to travel out of the country and our FLAIR association, can’t afford to host all thirty something members). This is a small group that through the years have made a friendship with Dr. Jana Sandarg, Augusta University professor and director of the Study Abroad program to Salamanca, Spain.

La Tuna de Salamanca is one of the oldest since University of Salamanca is the second oldest university in Europe, it was founded in 1218 and the Tunas as musical groups can be found throughout the school history.

The outfits they wear go back to Renaissance times and makes them look very handsome. Their capes are decorated with patches – that tell every event or place they have participated in. The ribbons that also decorate their capes are given to them by the female admirers as they travel through town or through the country breaking hearts.

The tuna Universitaria de Salamanca includes in its repertoire both typical songs of the tuna (Clavelitos, Fonseca …) to the most danced pasodobles through Fados, boleros and popular tradition. It’s a very wide repertoire that goes from one to the other. We can say that their songs are present in all popular culture, both Spanish and South American.